Hearings before the Subcommittee on Indian Affairs on the following legislation relating to Indian participation in the government and education of the Indian people:

“S. 1017, the Indian Self-Determination and Educational Reform Act of 1973, to provide for the full participation of Indian tribes in certain programs and services conducted by the Federal Government for Indians; to encourage the development of the human resources of the Indian people; to establish and carry out a national Indian education program; to encourage the establishment of local Indian school control; to train professionals in Indian education; and to establish an Indian youth intern program.

S. 1342, the Administration proposal to amend the Johnson-O’Malley Act, to authorize the Interior Dept to channel appropriated funds under the act directly to Indian tribes and communities for the improvement of Indian children’s education programs; to authorize the Secretary of HEW to contract directly with Indian tribes to carry out Departments Indian health responsibilities, and to detail Public Health Service personnel to assist Indian communities in carrying out health functions.

S. 1343, the Administration proposal to provide for the assumption of the control and operation by Indian tribes and communities of certain programs and services provided for them by the Federal Government.” 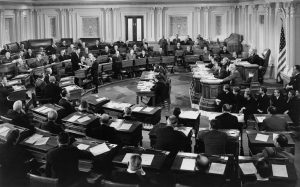